At that time Land Rover itself was not interested in retaining these wonderful prototypes which are part of Britain’s transport heritage and without Brian’s foresight and enthusiasm many of these vehicles would have been lost forever.

Brian's interest in Land Rovers was founded back in 1953, when his girlfriend's father told Brian that he couldn't take his daughter out on his Vincent motorbike. The purchase choices facing Brian were a Jowett Bradford van, a Ford Prefect or a secondhand Land Rover. To his eternal credit, Brian chose the Land Rover and soon developed a passion and enthusiasm for these iconic vehicles that led to him acquiring the first vehicles that were to form the nucleus of the Dunsfold Collection and, in due course, establishing a specialist parts and servicing business.

The Transport Trust, which is the UK’s only national charity established to promote and encourage the preservation and restoration of Britain's unique transport heritage in all its forms, recognised the importance of Brian’s work in 2003 when it awarded him a Lifetime Achievement Award.

Over the years, the Dunsfold Collection has expanded to include not only prototype and pre-production vehicles but examples of almost every model made by Land Rover from 1947 to the present day, including military vehicles, record-breakers, Royal cars, limited editions and display vehicles. The Collection is managed by Brian’s son, Philip, who is also an internationally-recognised expert on the Land Rover marque, and now has over 130 Land Rover and Range Rover cars. These are at present housed in a number of barns and can only be seen at our biennial Open Weekend when they are put out on display on a local estate. During the Open Weekend, visitors come from all over the world to view this unique Collection.

In 2014 the Dunsfold Collection became a registered charity and is now managed by a Board of Trustees who are Philip Bashall, Richard Beddall and Gary Pusey. The trustees want to ensure the vehicles, the wonderful collection of over 2,000 model Land Rovers and the Dunsfold archive of Land Rover engineering drawings, marketing and promotional material, manuals and handbooks are safeguarded for the enjoyment of future generations.

We are therefore seeking to raise sufficient funds to establish a permanent museum where the vehicles can be displayed to the public on a regular basis. Find out how you can help here » 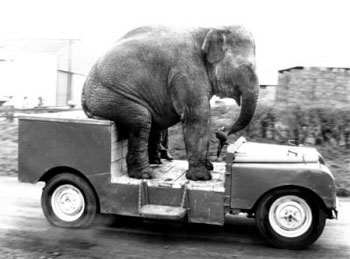