What a lovely show! 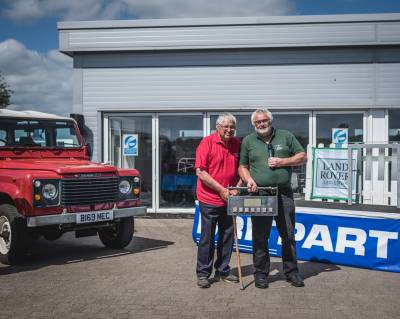 We decided to take the Half-Millionth Range Rover KD02 KGG that was driven off the production line in 2002 by renowned England goalkeeper David Seaman, who was so impressed that be bought it and kept it for three years. We are pleased to have it in the Collection and it is a handy tow vehicle, and it was a very topical exhibit given that this year is the twentieth anniversary of the launch of the third-generation L322 Range Rover.

2022 is also the twenty-fifth birthday of the first Freelander, so we decided to take one of the ever-popular Maestro Mules, J426 TVU, as well as the 1997 Frankfurt Motor Show launch vehicle, pre-pro R747 BAC that was generously donated to us by Freelander project engineer Dick Elsy CBE. We think 747 is the oldest Freelander on the road today and Legends was its first public outing with the Collection.

This year there was an addition to the event timetable on Saturday afternoon, when Richard Beddall hosted ‘The Dunsfold Collection Presents…’ during which we were able to showcase some of our vehicles with Richard summarising their history and significance.

Philip was delighted to join the judging panel to choose the Winning and Highly Commended vehicles in the Land Rover National Awards, and also presented the Brian Bashall Memorial Award, which this year went to Roy Preston.