Time to put your sunglasses on! 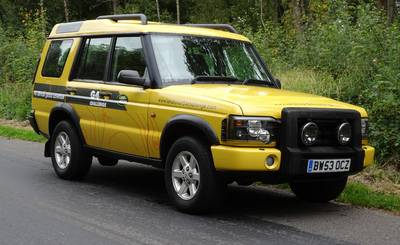 Land Rover made Range Rover, Discovery, Freelander and Defender G4 Limited Editions available to the public, and this Discovery 2 in eye-searing Borrego Yellow is one of them! Borrego was an alternative to the signature Tangiers Orange and the more sober Java Black and Zambezi Silver, and was not for buyers who wanted to remain inconspicuous!

We believe the vehicle was used by the company for promotional work at various events and may well have been used at one of the Land Rover Experience centres, which probably explains the non-standard decals on the sides.

It was sold to its first private owner on Kent or Sussex before being sold again and ending up in Cornwall and then Devon. Its fifth owner brough it back to Sussex and we couldnt resist it when it was offered to us. Like most D2s it has rust issues in the rear end that will require attention in due course.