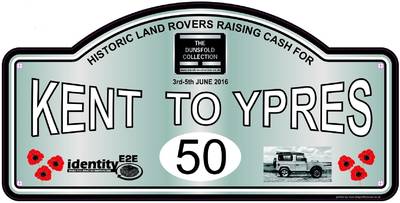 One of the most popular classic Land Rover events in the calendar, this year's Kent-Ypres Charity Land Rover Run will be held from 3rd to 5th June. Thirty six Land Rovers built between 1948 and 1975 will drive from the Battle of Britain Memorial at Capel Le Ferne, near Dover, to Ypres. They will be joined en route by additional vehicles from Belgium, France and Luxembourg.

Over the years, the Kent-Ypres run has raised a tremendous £36,000 in support of its chosen charities. Commenting on the selected charity for the 2016 event, organiser Peter Wales said, 'This year we are raising money for a charity close to the hearts of all Land Rover enthusiasts, The Dunsfold Collection. Help us preserve this important collection, which is part of our heritage and and the history of the British motor industry, for future generations. Please make a donation to show your support'.

Land Rover fans everywhere can visit the Kent-Ypres page on Virgin Giving to pledge their support:

We at the Dunsfold Collection are honoured to have been chosen, and deeply grateful for your support. Our own Richard Beddall is planning to join the run in his 1948 Series 1.